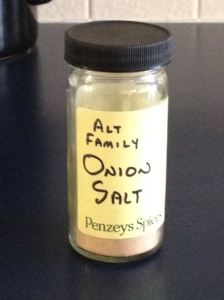 The term “Family Tradition” means something different for everyone, particularly as we approach the Christmas Holidays.  For some, it brings warm memories of things like the practice of being allowed to open one gift on Christmas Eve or writing letters to Santa.  For others, it  the awkward memory of being coerced into singing The Chipmunk Christmas Song over and over until everyone at the party has had the chance to take a solo run singing “Me, I want a HULA HOOOOOP!” But what I really, really enjoy learning about is the smaller traditions people have that are a bit silly, but at their core really make the family into family.

The Alts have had a lot of fun traditions, but one of my favorites is Onion Salt Toast.  See, like most rational human beings, my family loves some good cinnamon sugar toast. We especially love it for a special breakfast, such as when my brother’s family from Indiana and I all converge on Mom’s house in the St. Louis area for a holiday or a long weekend.  I could eat my weight in cinnamon sugar toast, and as long as there are enough supplies in the house I will also happily share.  But anytime someone new enters the scene without a proper briefing, they will have a helluva time constructing their own cinnamon sugar toast because they won’t be able to find the cinnamon sugar mix.  Why?  Because it lives in a jar that is very clearly labeled ONION SALT.

The cinnmon sugar/onion salt jar had humble beginnings years ago. It’s not an exciting story in the least.  Basically, someone mixed up cinnamon sugar and had trouble finding a jar to put it in.  The onion salt jar happened to be empty, so it was rinsed out, the cinnamon sugar put into it, and life went on.  Over time, all the members of the household figured out that the cinnamon sugar lived in the onion salt jar, and we went on with life as normal. I am amused by such things, but didn’t think about it a lot until I brought home a boyfriend one time. Said boyfriend was tasked with helping make breakfast but sadly could not find the dadgum cinnamon sugar. Much hilarity ensued, and he was properly assimilated.  Eventually, he gave me my very own Alt Family Onion Salt jar for my spice cabinet in Kansas.

The love I have for my family’s Onion Salt makes me love to hear about silly traditions other family’s have.  My friend Kelly, recently educated me as to the proper way to pass the butter.  For at least three generations in her family, whenever you pass the butter to someone, you must vigorously shove the butter dish at them so that their thumb lands in stick of butter.  Kelly’s family appreciates that butter must be served at room temperature for optimal spreadability, so having the butter shoved into your thumb makes a visible dent. And it also makes an enlightened dinner guest like myself laugh heartily at the fabulousness of yet another small family tradition.

The Onion Salt story is not the stuff dreams are made of, and I don’t expect it to win any wars or cure cancer.  But it will always be special to me – because it’s MY family’s tradition.  It’s one of the things that make the Alt family stick together.  I hope that as long as one of my parents’ descendants walks this earth, there is improperly labeled Onion Salt in the spice cabinet. And from now on, you may want to watch out when I pass the butter.

2 responses to “Family Traditions: Onion Salt and Passing The Butter”