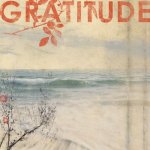 Lately, instead of feeling like I’m Busy Being Awesome,  I’ve felt very much like life is Not Awesome At All, but I’m working to get my perspective back. I’ve posted before in the past that I deal with depression.  Recently, it’s reared it’s ugly head, which means that my life in general Just Feels Harder Than It Should Be Right Now. There are a number of tactics that I’ve learned to use when I’m dealing with this, many of which I outlined here, but there’s one thing that I had forgotten about until the last week or so that has proven effective in the past – writing down some things you are grateful for on a regular basis.

This tactic was first suggested to me about a year and a half ago by my therapist, and I would be lying if I said I embraced it immediately.  Truthfully, it seemed a little bit of a “1980’s episode of Oprah”  tactic – a bit patronizing and aLOT cheesy.  But I was miserable, and as my therapist seemed neither cheesy nor patronizing, I agreed to give it a try.  I wouldn’t call it a silver bullet – there were some other tools she gave me that were more effective – but it did serve to change my perspective on some things just enough that I could crawl out of my rut.  The past couple of weeks, I’ve realized that it could be a good idea to pick this practice back up.  In that spirit, here are a few things that I’m grateful for today.

*My Super-Hero Movie Friends, Matt and Brent.  Iron Man 3 opened on May 3rd, and I decided that I was constitutionally incapable of going back to work the following Monday without seeing this flick.  Now, I normally don’t mind going to see movies by myself – after all, you’re supposed to sit in a dark theater for 2 hours without talking to anyone – but fig blockbusters like this one, I like to go with someone.  Matt and Brent are always good for this, which will make my weekend much more delightful.

*The weather.  Yes, despite the rain and cold and the fact that it feels like February 94th instead of May 4th, I am grateful for the weather.  The cool, rainy spring (with some super-fun snow thrown in) serves to remind us that we are NOT in control, and never will be.  It also is a lovely contrast to the starkness of last year’s drought – and gives me hope that my 2013 water bills will be a lot smaller than 2012.

*A comfortable financial picture that allows me to pursue health care.  I’ve posted before about my ongoing struggles with neck and shoulder pain.  The past couple of months, I’ve spent a lot of time and money on chiropracty and massage, and recently primarily to Physical Therapy.  I’ve learned that my issues seem to be caused by serious entrapment/irritation of the C-6 nerve, and have been told to go to PT twice a week for the next month.  At $30 bucks a pop for co-pay, this is not a cheap thing – but it’s also not too expensive for me to handle.  I’m so fortunate to be able to pursue multiple avenues to address this issue.

*Bacon.  I’m always thankful for bacon.  Who wouldn’t be?

There. I feel a little better.

What are YOU grateful for today?